During phase 2, elevated stress hormone cortisol levels deplete all-important adrenaline (epinephrine) levels. There are limited reserves of adrenaline in the body and when a person is under constant psycho-emotional stress these reserves are depleted quickly. While insulin is used to transport glucose into cells, it is adrenaline which is critical for cell respiration and for converting this glucose in the cell into ATP energy for the body and for healthy cell division [which occurs via the metabolic pathway known as Oxidative Phosphorylation and via the Krebs’ Citric Acid Cycle of the mitochondria of the cell]. Without adrenaline to stimulate the G-Protein to stimulate production of the GDP molecule [which is essential for mitochondrial cell respiration and glucose conversion] the cells Krebs’ Citric Acid Cycle and Oxidative Phosphorylation metabolic pathway is broken and the cell is forced to ferment glucose instead as a means to obtain [smaller amounts of] ATP energy [via the process known as Glycolysis], which creates lactic acid in the cell and a low pH environment. This sets the stage for the cancer-fungus to evolve in phase 3 to ferment rising glucose and lactic acid, causing cell mutation.

In 1931 Otto Warburg was awarded the Nobel Prize for Physiology in discovering the mechanism for mitochondrial cell respiration. As director of the Kaiser Wilhelm Institute for Biology in Germany, he is most famous for discovering that cells mutate into cancer cells due to loss of respiration within the cell’s mitochondria, which results in the cell fermenting glucose as a secondary means to obtain energy for the body and the cell [through the process known as Glycolysis]. This process of fermenting glucose occurs in the cytosol (or intracellular fluid) of the cell, causing a discharge of lactic acid. The discharge of lactic acid within the cell creates a low pH (or highly acidic) environment. Otto Warburg postulated the cause of the loss of cell respiration was—sounding most logical—a depletion of oxygen in the cell. And while this may play a role, it is in fact the depletion of adrenaline that disrupts cell respiration above all. When a person is under prolonged psycho-emotional stress, adrenaline levels initially spike; yet over months and years adrenal fatigue results and the production of adrenaline declines significantly. This is important, as it is the job of adrenaline to convert glucose within cells into ATP energy for general bodily use and for cell respiration. This occurs through adrenaline stimulating the G-Protein which subsequently stimulates production of the GDP molecule within cells. The Krebs’ Citric Acid Cycle [which is akin to a large processing factory inside the mitochondria of the cell] uses the GDP molecule to produce the energy molecule GTP. GTP is used to convert glucose into ATP energy through the metabolic pathway known as Oxidative Phosphorylation. In cancer patients, the Krebs’ Citric Acid Cycle [which is the precursor to Oxidative Phosphorylation] comes to a halt without the all-important GDP molecule to keep the glucose-ATP-processing factory running, causing a build-up of glucose in the cell. In order to survive, the cell ferments glucose instead to obtain ATP energy, discharging lactic acid. The somatid (tiny micro-organisms necessary for life that live in our body) pleomorphism into pathogenic (harmful) cancer-fungus to ferment rising glucose and lactic acid in the body’s cells, migrating to the cell nucleus in phase 3 of cancer, causing cell mutation/cancer. 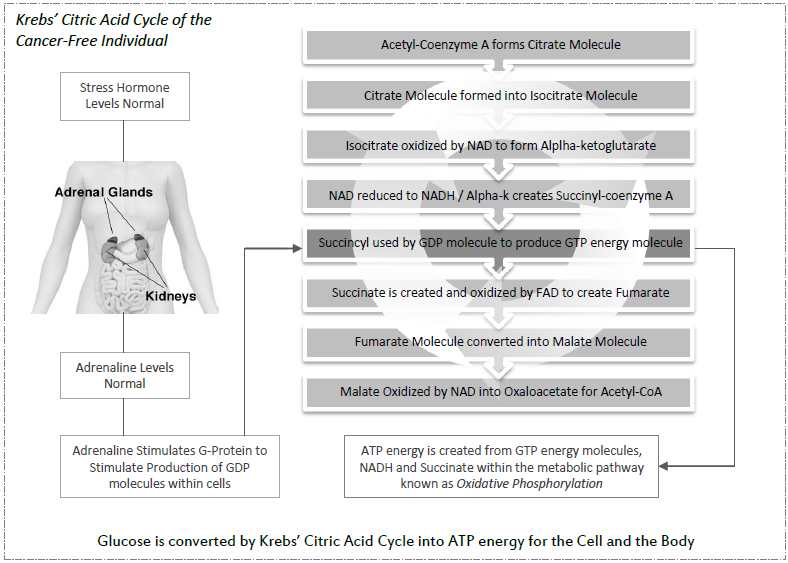 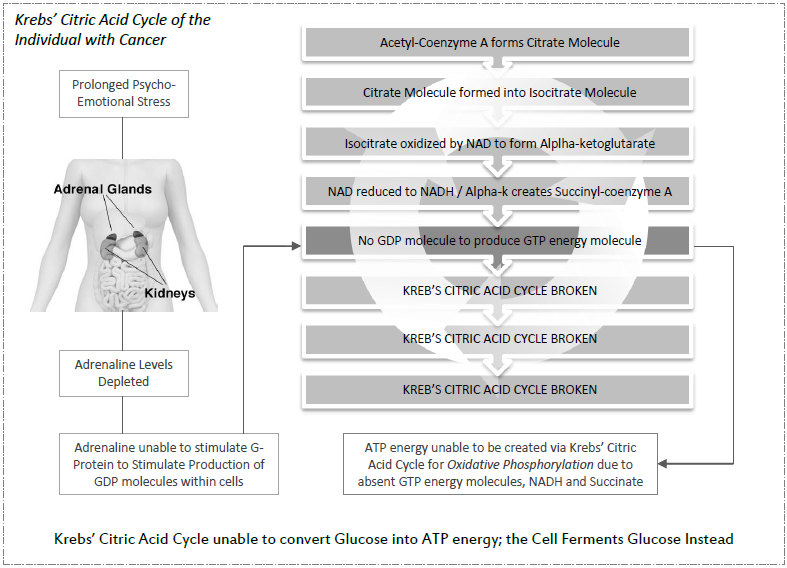 The driving force of the increase of fermentation, however, is the [GTP/ATP] energy deficiency under which the cells operate after destruction of their respiration, which forces the cells to replace the irretrievably lost respiration energy in some way. They are able to do this by a selective process that makes use of the fermentation of the normal body cells. The more weakly fermenting body cells perish, but the more strongly fermenting ones remain alive, and this selective process continues until the respiratory failure is compensated for energetically by the increase in fermentation. Only then has a cancer cell resulted from the normal body cell. Now we understand why the increase in fermentation takes such a long time and why it is possible only with the help of many cell divisions. Since the increase in fermentation in the development of cancer cells takes place gradually, there must be a transitional phase between normal body cells and fully formed cancer cells. Thus, for example, when fermentation has become so great that dedifferentiation has commenced, but not so great that the respiratory defect has been fully compensated for energetically by fermentation, we may have cells which indeed look like cancer cells but are still energetically insufficient. Such cells, which are clinically not cancer cells, have lately been found, not only in the prostate, but also in the lungs, kidney, and stomach of elderly persons. Such cells have been referred to as “sleeping cancer cells”. Figure 4 [below] shows that the pathways of respiration and fermentation are common as far as pyruvic acid. Then the pathways diverge. The end products of [glucose] fermentation are reached by one single reaction, the reduction of pyruvic acid by dihydro-nicotinamide to lactic acid. On the other hand, the end products of the oxidation of pyruvic acid, H2O (water) and CO2 (carbon dioxide) [of respiration], are only reached after many additional reactions.” 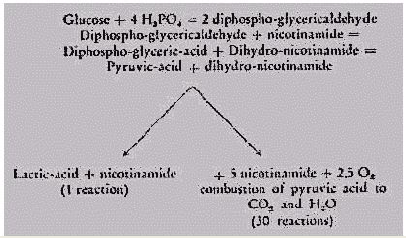 Dr Waltraut Fryda served as a senior physician at the world-famous Issels’ Ringberg Klinik in Germany. She wrote the book Diagnosis: Cancer, underscoring adrenaline depletion as the central causal component of cancer that destabilized the homeostasis of the body’s correct tissue pH balance. Dr Fryda used adrenaline and the administration of the positive form of lactic acid [dextrorotatory lactic acid] to normalize the body’s correct [acid-alkaline] pH balance and to restore health to many patients. In the excerpt from her book below she describes this mechanism.

Dr Waltraut Fryda: “A cancer patient always suffers from over-acidification of the tissues. In order to deprive the tumour of a favourable environment, the tissue-pH value must be changed from acid to alkaline. This is easier said than done because all alkaline-forming nutrition loses its intended effect soon after entering the bloodstream, as it is used up in the blood for buffering, before it can reach the tissue. The [human bodily] organism always endeavours via appropriate regulating mechanisms to maintain the blood-pH value at around 7.4, which is absolutely essential for the stability of hormones, in particular adrenaline. A brief recapitulation of the law of reversed proportionality of pH value changes in blood and tissue: if the blood-pH value drops, the tissue-pH value rises (and vice versa). This gives us a kind of lever: it should be possible to indirectly raise an unhealthy acid-tissue-pH value by lowering the slightly alkaline blood-pH value. Over-acidification of tissue is prevented in a healthy [human] organism by the dextrorotatory lactic acid that is constantly produced by movement and suitable nutrition. This, therefore, indicates that an input of optically dextrorotatory lactic acid is needed. This may seem like a contradiction to the layman, in that tissue is to be deacidified by administering an acid. The paradox disappears, however, if all interrelations are kept in mind. Acidification of the blood by means of dextrorotatory lactic acid [commercially available as Pleo Sanuvis®] lowers the blood-pH value until it and the tissue-pH value reach the same level. This takes precisely five weeks in cancer patients who are administered an appropriate dose of dextrorotatory lactic acid [thirty drops, three times daily]. This has been confirmed time and again by my own measurements over many years of the blood-pH value. During the period from the first until approximately the fourth day in week 6, the acid substances will be discharged from the tissue into the blood, the pH value of which drops for a short time to very low values. The excretion of the pathological substances of the tissue via blood, liver, kidneys, and skin during this period is apparent from an entirely pungent and acid smell. I am as yet unable to explain the reasons for the period of five weeks. However, the same physical and psychological symptoms occur after this [five week period]. Feeling generally unwell, the patient is irritable, aggressive, and depressed at the same time. At the height of this “changeover reaction”, usually lasting for three days, the pH value of tissue and blood reach the same level.

The continued supply of dextrorotatory lactic acid (Pleo Sanuvis®) finally ensures an unproblematic and physiological restitution and maintenance of a blood-pH value of 7.4 and a tissue –pH value above that figure. This will remove a critical precondition for continued growth of a tumour in a cancer patient, namely the acid environment. Kidneys and liver are now capable of carrying out their full detoxification functions, thereby, laying the foundations for a safe removal of subsequently occurring disintegration products of a malignant tumour. Finally, dextrorotatory lactic acid also causes the biological neutralization of the toxic, levorotatory lactic acid of the tumour into a non-toxic, racemic form. This is of utmost importance, as it removes the stimulus for an increase in the cell division rate. Normalising the acid-alkali balance also stimulates adrenaline production and improves its effectiveness, an equally important precondition for a healthy [aerobic cell] metabolism. The therapy here introduced offers relatively great advantages to patients, because, the “changeover” reaction over three days excepted, they are not subjected to any stress. It is neither painful nor does it cause vomiting, loss of appetite, bleeding of the bladder, or other similar side effects that are well-known from aggressive therapies.” [Note: Dextrorotatory lactic acid is a main ingredient in whey (the liquid component of cottage cheese) that is combined with flaxseed oil to form the Johanna Budwig Cancer Diet.]

Within the 2nd Phase of Cancer the following sequence of events can be observed in the cancer patient: