A remarkable new study published in the International Journal of Rheumatic Diseases confirms that food is not only medicine, but sometimes superior to it.
Medical researchers working out of Tabriz University of Medical Sciences, Tabriz, Iran, sought to investigate the effects of sesame seed supplementation on clinical signs and symptoms in patients with knee osteoarthritis.[i]

Knee osteoarthritis is a form of degenerative joint disease or degenerative arthritis localized in the knee, and causes a variety of symptoms including pain, swelling, abnormal bone growth (which can result in bone spurs), disfigured cartilage and loss of motion, and it affects as many as 12.1% of adults aged 60+, according to the CDC.[ii] Standard therapy involves the use of NSAID drugs, many of which have been linked both to internal bleeding and significantly increased risk of cardiac mortality, which is why the researchers sought out to look for “a complementary treatment to reduce complications and costs.”

The study took fifty patients with osteoarthritis of the knee, and divided them into two 25-patient groups: a sesame group, receiving 40 grams/day of powdered sesame seeds, and a standard drug therapy group, receiving two 500 mg doses of Tylenol twice a day along with 500 mg of glucosamine once daily. After two months of treatment, 22 patients in the sesame intervention group and 23 patients in the control group completed the study. Table 1 Considering that treatment was comprised of little over an ounce and one half of sesame seeds, the results were truly remarkable. As presented in Table 1 above, there was a significant difference in pain intensity between the two groups after treatment, with the sesame group seeing the largest drop from 9.5 before treatment to 3.5 after treatment, and the control group seeing a more modest drop from 9 before treatment to 7 after treatment. Additional measurements were taken using both the Knee Injury and Osteoarthritis Outcome Score (KOOS) Questionnaire and the Timed Up and Go (TUG) Test. Both tests revealed a similar degree of positive change in both treatment and control groups, when compared to baseline. [See table 2 and table 3 below]. 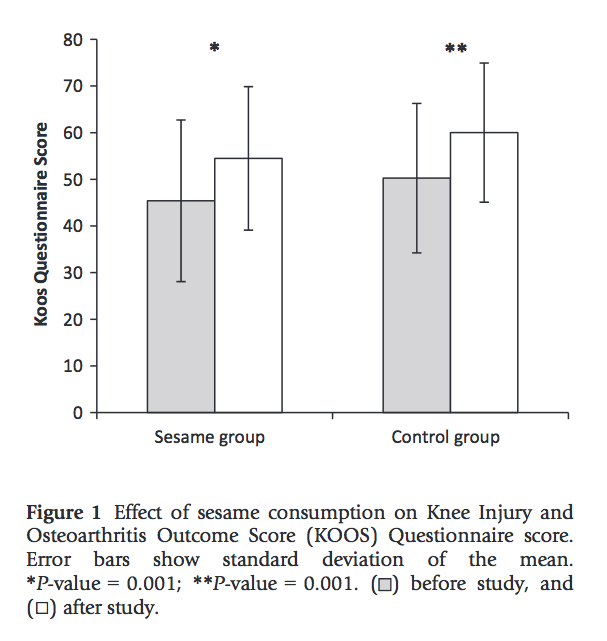 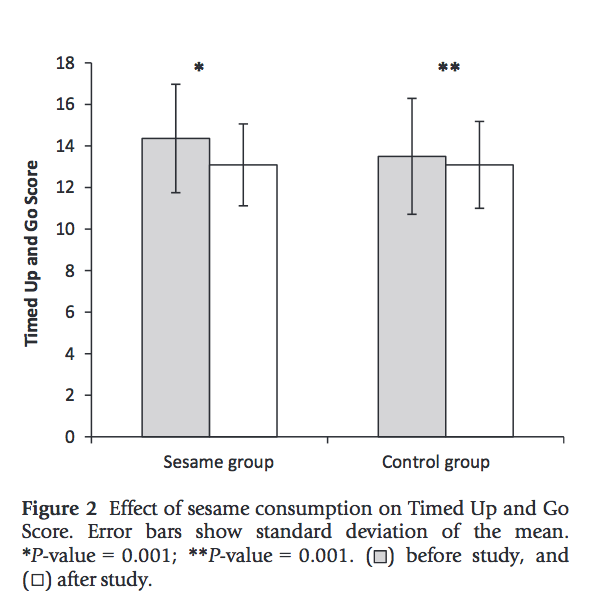 Taken together, sesame was the clear winner. Not only was this food therapy superior in reducing the intensity of pain, but it was at least equal in effectiveness to Tylenol and glucosamine in both the KOOS and TUG tests. This, of course, was accomplished without the notorious side effects associated with Tylenol; to the contrary, sesame seed has a wide range of side benefits, which we covered recently in our article on sesame’s health benefits. So, how much is 40 grams of sesame seed? A tablespoon of sesame seeds is approximately 9 grams. So, approximately 4 tablespoons will get you to what the study found to be a ‘clinical dose.’ Also, the researchers powdered the sesame seeds in order to enhance digestion. Remember, it is best to do this fresh with a mortar and pestle (first choice) or coffee grinder, also making sure that your seeds are raw, certified organic, and vetted to have not undergone gamma irradiation. To truly appreciate the significance of this study, take a look at the growing body of toxicological research indicating that the unintended, adverse health effects of Tylenol (acetaminophen) far outweigh its purported benefits. We recently featured articles on the fact that even only occasional use of Tylenol may raise a child’s asthma risk 540%, and that it may be time for the FDA to remove it from the market.