Battle for the Net: ‘Neutrality’ is fundamental basis of the Internet

Battle for the Net, an internet freedom campaign joined by heavyweights of the internet industry, has succeeded in sending millions of public comments to US authorities criticizing the two-tiered internet speed system that threatens net neutrality.

According to the organizers, the Federal Communications Commission (FCC) and members of Congress were receiving an average of 1,000 calls per minute. At the same time, the FCC says that its rule on net neutrality – which is open for public comments until September 15 – generated over 1.4 million clicks.

RT caught up with Steve Sarner, Vice President of tagged.com, and Kevin Collier, a reporter from dailydot.com to get more information about the September 10 net neutrality action day.

RT: How many sites could be affected by this FCC regulation? Is the danger being overblown?

Kevin Collier: No. There is no telling exactly how many sites were we to lose net neutrality immediately, but it is sort of a fundamental shift. I don’t think it is terribly overblown, just because we can’t really imagine what the internet is going to look like in 2- 3 years, except it is probably safe to say that a two-tiered system is going to have whole mess of problems. 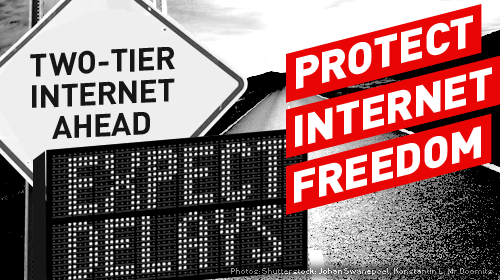 RT: But like with most things in life: you pay money; you get a nicer seat on the plane. You have to pay a bit more for it if you want faster internet. Of course if you’re a business that thing counts very much. ‘Well, you pay for it, so why shouldn’t you get it?’ the business will argue. Steve, what do you think about it?

Steve Sarner: Well, I think that it is a fundamental fact that the internet is based on, a completely neutral stand. That is why it is such a great thing. There are services that you can upgrade to but this is the fundamental backbone of the internet, and this [proposed regulation] would severely limit and hinder the ability for great services, new things to crop up.

It will definitely cripple many, many sites. Kevin did not know how many but I would say a vast, vast majority. This is a very significant problem, and I’m glad we are trying to get the word out.

RT: So Kevin, who is pushing this?

KC: You won’t find anybody except for the cable companies and the politicians who receive a substantial amount of lobbying money from them. There isn’t really anyone else who is making this argument. This is a pretty cut and dry [regarding] who wants this and who is harmed by this.

RT: But Steve, with so much demand for the internet and these companies that have to pay for staff, for service, etc. Surely a day would come at some point where we wouldn’t have this idealistic – it’s free for all – it was going to come, it was on the cards?

SS: I don’t think so. I think the internet has been scaling just fine as is, and these companies benefit from this tremendously. This is an opportunity for them to try to increase their profits – not to help the overall consumer. We really need to keep the internet free and open. That is what makes it so powerful, so beneficial for everyone.

RT: What is the American government going to say about it, because you are in the land of the free there, surely?

SS: Well, we applaud the FCC for going through a very thoughtful process and it is really up to us now, and sites like Reddit and Netflix, and it is great to hear it from Kevin that Google is joining the cause to get the word out.

Just like we did with the folks fighting for freedom with the SOPA and PIPA two years ago. And we did a great job in stopping that nonsense in trying to restrict access to the internet. And today again, we’re trying to make sure that the speed stays equal for everyone. So we are big believers in it. We’re happy to be educating our millions of users and having them click through the FCC to let them know that this is important to them as well.

RT: Kevin, final thoughts from you: which way is this going to go, do you think?

KC: I think it would be an incredibly black mark on the FCC if, after all of these comments…We have just today surpassed the longtime comments record of how many complaints it got, which [used to be] the Janet Jackson halftime Super Bowl show… Well over a million now. It might hit 2 million comments largely from Americans – they are all opposing this. And very few people who are supporting the ending [of] internet neutrality. It would be a huge smudge on the FCC if they did not listen to the people here.